Are Millennials the Future of Network Marketing?

Generation Y, or more commonly referred to as Millennials, is the generation born between 1981 – 1996. Millennials make up around 27% of the world’s population and are nearing 80 million strong in the United States alone.

Millennials are the most confident, self-expressive, open-minded, and most educated generation yet, according to Pew Research Center.

One of the things that makes Millennials unique is that they were born into the modern era of technology. They were the first generation to grow up with the Internet, cable TV and cellphones, and they’re fluent and comfortable with technological innovation, according to Nielsen.

Most Millenials came of age during the financial crisis of 2007-2008 and witnessed the economic decline, as they were entering the workforce.   As a result, according to a study by Merrill Edge, 85% of Millennials are more likely to play it safe with their daily expenditures. The study also concluded that 53% of Millennials have delayed having children because of the financial crisis and 58% stated it affected their plans for higher education.

Despite The Great Recession, Millennial shoppers spend $600 billion every year, according to market research by Accenture. The same study projects that by 2020, Millenial spending power will go up to $1.4 trillion, annually and will make up 30% of retail sales in the United States.

Millennials seek leadership and mentorship in order to help them grow and develop professionally.  The study found that employees that are likely to stay loyal to their organization for 5 years or more are 68% more likely to have a mentor. 63%  of Millennials in the study said their leadership skills are not being developed in their current employment and they often feel overlooked for leadership roles within the company.

Many Millennials have shifted their mindset towards network marketing, to build themselves a better future and seek alternative or additional income streams. Here’s why network marketing appeals so much to this particular generation.

The 9-5 work day seems to be a thing of the past, as Millennials have a strong belief that the number of hours worked in a day aren’t as important as output and quality of the work performed. A study, conducted by Bentley University, found that 77% of surveyed Millennials find flexible work schedules more productive.

EY’s Global Generation Research concluded that in the last 5 years, Millennials have seen an increase in work hours at a time when many of them are trying to start families.  In a survey conducted by FlexJobs, 85% want to telecommute and 67% indicated that family was their main reason for a flexible work schedule. Millennials often get stigmatized for using their phones too much, but an undeniable fact is that never being “offline” gives them the ability to work remotely from anywhere in the world.   And no career provides more flexibility of hours and location than network marketing.

According to Statista, the steady increase in social media usage over the last 5 years has seen Millennials spending around, 225 minutes a day using mobile internet. 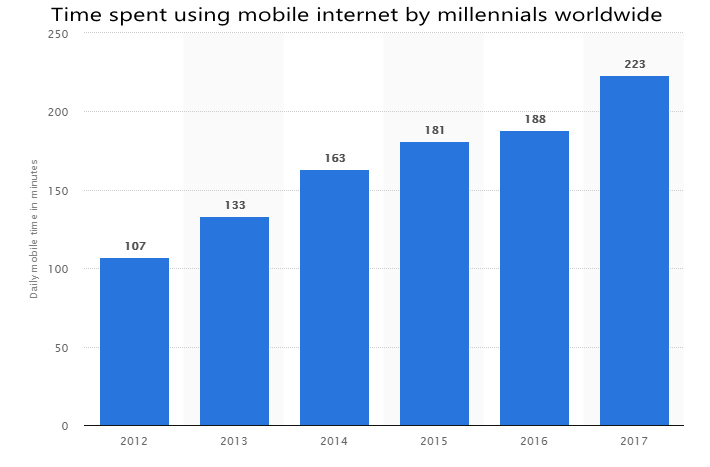 Millennials are natural marketers – most of them already do it every day on social media. Popular social media sites, such as Instagram and YouTube, have given Millenials a means to share products and services that they’ve tried and tested.

TripAdvisor and Yelp are two more excellent examples. On these sites, users have shared millions of unbiased opinions and reviews of destinations, hotels, airlines, and more.

These sites and the behavior of Millenials aligns perfectly with the essence of network marketing: real people, sharing their experiences with products through social media, and using themselves as the spokesperson.

The days of being restricted to a town, city or even country are gone. Social media has expanded a network marketer’s reach to millions of people around the world. From sharing photos on Instagram to tweeting an opinion about a product, social media has allowed for interactions from all over the world to take place in seconds.

The cost of living is on a steady increase, especially in major cities. The annual inflation rate edged up to nearly 2.5% in April 2018 and for Millennials, this means they need more diverse ways to sustain themselves.

As the most social generation, online and in-person, Millennials thrive in communities and are more likely to live in densely populated cities, as opposed to the suburbs, according to a study conducted by Nielsen. 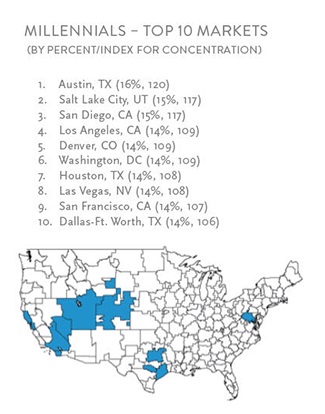 In January 2012, the average value of a home in California was around $300,000 and as of April 2018, they’re valued at $542,900, according to Zillow. What does this mean for Millennials who are trying to purchase their first home? With homes going up by 9.9% in value, in the past year alone, Zillow projects an increase in 9.4% in the next year. Millennials looking to purchase homes will have to increase their earning potential to keep up with the rise in property prices.

Pew Research Center took data from the  “Survey of Household Economics and Decision-making” and found that out of adults aged 18 – 29, 37% say they have student loan debts, outstanding.

According to the “Household Debt and Credit Report“, by the Federal Reserve Bank of New York, balances on student loans increased by $29 billion in the past year and total to $1.41 trillion, as of March 2018.

With student loan debt on the rise, the pressure is mounting up for new graduates to find additional income sources.

According to, James Barnash, chairman of the Financial Planning Association, Millennials look at the world differently and aren’t dependent on large corporations or the government to provide for them. Millennials understand that they will have to fend for themselves, and will do so by being more creative in their pursuit of income than any generation before them.

The unlimited earning potential, combined with the flexibility of lifestyle it provides, the availability of mentorship, and the strong potential for success using social media all indicate that network marketing will be an ideal career choice for millions of Millenials.

6 Network Marketing Trends to Watch in 2018

Haven’t you heard? Network Marketing is growing quickly around the world. In fact, it’s been growing strong for six years straight and annual global revenue is rapidly approaching $200 billion.  Needless to say, now is Read more… 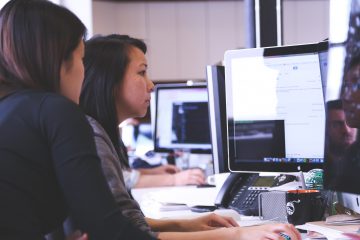 Managing relationships is important, especially for network marketers. In this industry, it’s all about who you know (and how many people you know). But what’s the use of growing your network if you’re not going Read more…